Congressional negotiators struck a deal Thursday that overturns the new rules that were to have banned sales of traditional incandescent light bulbs beginning next year.

What if, in a strange alternate universe, the incandescent bulb was invented today, and the CFL had been invented first? 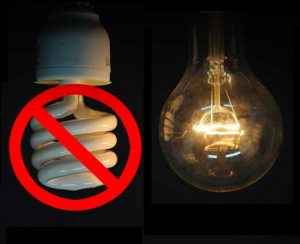 While not as energy efficient as the standard CFL bulb, giving off more heat and having a shorter lifespan, these inexpensive new lamps are manufactured with little or no heavy metals or other noxious materials.

Composed of little more than Glass, Aluminum, perhaps a bit of Brass and Copper, a couple of inert gases and a miniscule amount of tungsten, the revolutionary new bulb, unlike the Mercury laden CFL lamp, costs pennies to manufacture and is 100% recyclable.As a bonus, if people choose to not recycle their bulbs, these new bulbs are harmless to the environment.

Environmentalists are expected to lobby Congress for a swift approval of the new bulbs, and an outright ban on the the dangerous, polluting, expensive CFL bulbs.